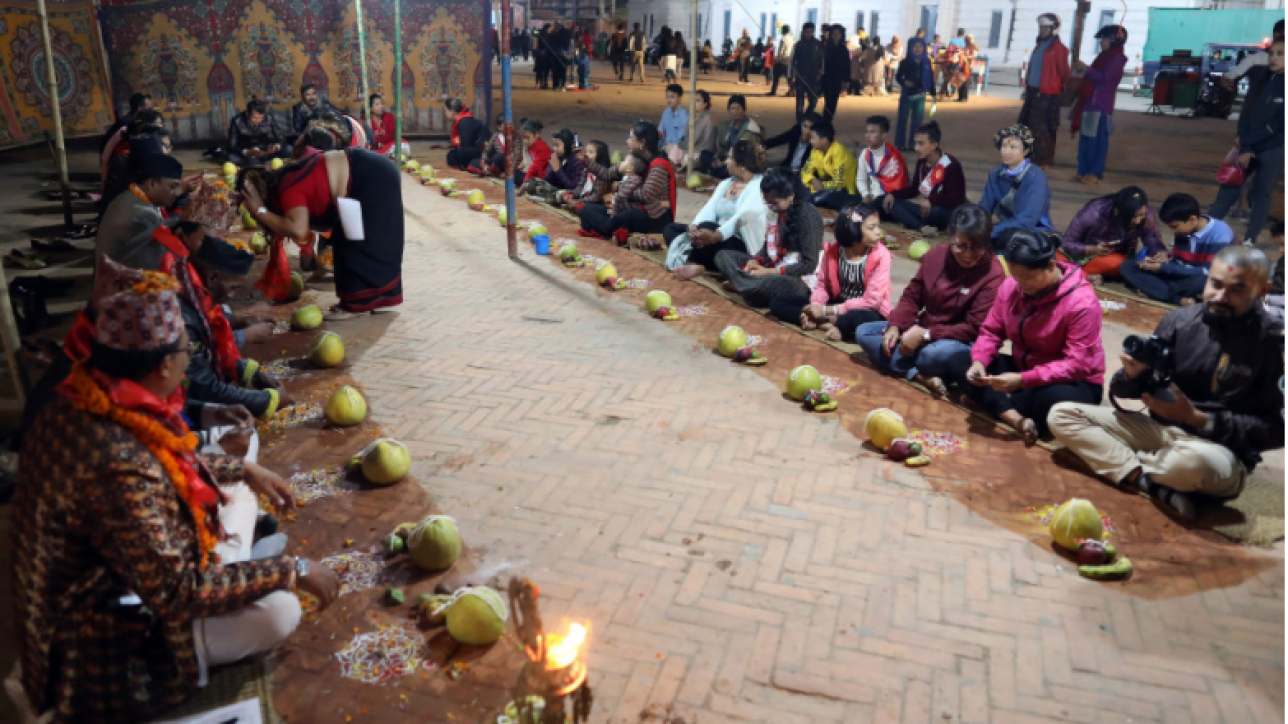 The new year rituals of the Newa community can be promoted as a pan-Nepali event as well as a tourist attraction.

Tihar, known as Swonti to the Newa community, is a very important festival for many groups in Nepal. The Newa community, in particular, celebrates the New Year according to the Nepal Sambat calendar at this time. The Nepal Sambat was used as the official calendar in Nepal until 1903, when it was replaced by the Bikram Sambat calendar (which was introduced by then prime minister Chandra Shumsher Rana). The Gujaratis also celebrate their New Year on the same day during Tihar.

People of the Newa community all over Nepal, who were denied the right to their language and culture during the Rana regime and later on during Panchayat rule, took this day as an opportunity to demonstrate their presence. The iconic Patan Dhoka used to be painted afresh each year. My student day memories in Kalimpong was to receive the Nepal Era calendar that was published along with many publications that used to be published in the Newa language by various groups. That was perhaps the only written material in Newa language we got to read. I remember the Newa magazine Dharmodaya saw a brief revival being published from Kalimpong since it was a challenge to publish and distribute in Nepal.

In the Kathmandu Valley, the honking of the motorbikes and the rally during the day marked the celebrations and bhintuna greetings were only some of the words that younger Newas could speak in their mother tongue. After 1990, the celebrations became a bit more prominent and the establishment of a statue of Sankhadhar Sakhwa, who is linked to the starting of the Nepal Era, suddenly rekindled the discussions around Nepal Sambat being the official calendar. During the ethnicity and identity politics of the Maoist insurgency, the Newa community used celebrations of the Nepal Sambat New Year as a mascot representing their culture. Baburam Bhattarai during his tenure as prime minister made many promises of making it the national calendar, and the discussions have continued.

One unique part of the celebrations is doing the Mha Puja—a worship of the self. It is a sense of gratitude one offers to oneself, wishing a healthy and hearty life till the next year. Recently, there have been instances of Mha Puja being performed en masse at Basantapur Durbar Square. It presents itself as a unique way for tourists, expatriates and non-Newa Nepalis to understand and appreciate Newa culture. In this way, such open rituals can be used as major tourist attractions, akin to carnivals.

The weather during Tihar is generally good. The clear blue skies, the views of the mountains and the nip in the air in the evenings all add to the experience. Before tourism became a year-round affair, the tourist season in Nepal provided few opportunities for exploration—besides the usual hotspots of Thamel, Sauraha and the Lakeside in Pokhara.

But with the Mha Puja, Nepalis can push the event to the same popularity as many of the festivals celebrated around the world. Perhaps, like Christmas and New Year menu experiences in hotels, there could be hotels that could host their own Mha Puja celebrations, giving tourists an unforgettable experience.

With a large Nepali diaspora that has ageing relatives back home, such cultural festivals can cater to Nepali vacationers who want to come back home to celebrate moments with the family—without being burdened by housework. Families here can avail of digital services such as Airbnb to open their homes to vacationers, creating additional income while adding more festive cheer.

Many may worry about preserving the sensitivities of the rituals. Many more will worry if they are doing the rituals as authentically as possible. For those who are concerned about what is the best ritual and how best to do it, there will always be audio-visual content to help one learn. What matters is that the culture and essence of the rituals aren’t lost. Recently, Nepalis have embraced baby showers. Many have begun to make rangolis during Tihar. Wedding cakes are becoming an all too common feature in all celebrations, from birthdays to becoming a part of wedding saipatas. Similarly, many versions of the Mha Puja can be performed—as long as it is fun and it is about understanding the significance of the culture.

This can be an all-Nepali event that can become community agnostic, much like many other festivals that all communities like to celebrate. To make this a pan Nepali celebration at the earliest, we must begin in haste. After all, they say that the best aila—a beverage that is integral to the Mha Puja—needs to be brewed beginning in December-January.