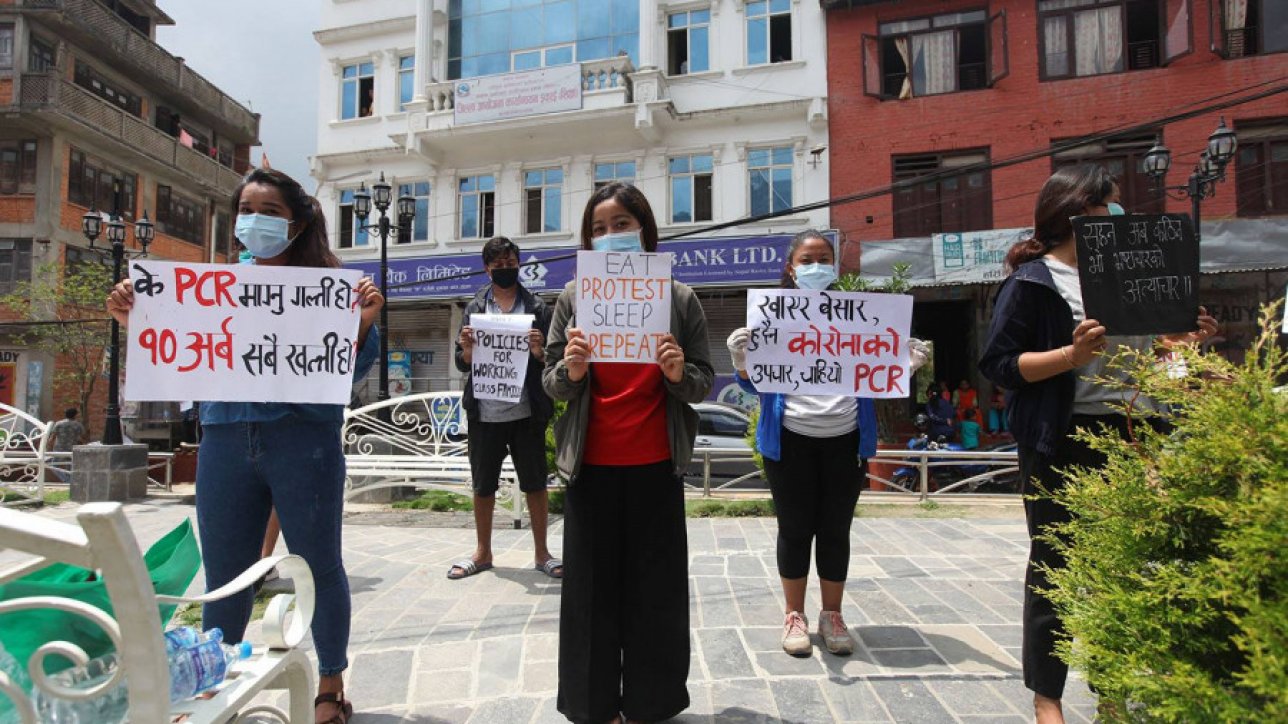 Through peaceful and smart protests around the country, the youth have demanded a structural transformation. It should be perceived by a warning bell by all of society.

A youth, out of frustration, started a group on Facebook called ‘Covid-19 Nepal: Enough Is Enough!’. When I first came to know of the page, it had 500 members. In just a week, the number has swelled to over 180,000. From the outset, the group has called for protests against governance, not for a change of government. It has demanded accountability on the public money spent and questioned the manner in which the federal government handled the pandemic.

The people venting their disapproval now are very different from the usual protesting crowd. This group definitely departs from the image that party workers project; politically backed protestors in Nepal seem to think that the more furious the mob looks before a camera, the more effective the protests. But the protestors currently demanding change are not the kind to burn tyres or destroy vehicles and property. What happened recently was a departure from the youth vandalism we see in the streets in the name of protest.

It is common in Nepal to spend years in college and university to ensure one keeps a position in the unions. The student unions have in the past competed over who could be more violent or forceful. They received patronage from political leaders as many of them later became leaders in mainstream politics because of their superb track record of their triumph of politics over education. There are only a few exceptions to this rule. Yet, the recent protestors were not visibly tied to any such student unions.

In Unleashing the Vajra, I have described the type of people currently showing dissent as the ‘Global Nepalis’. Nepalis who want their world to be the best any youth can have anywhere in the world. They grew up with education taught in the English language; therefore, they are exposed to more writings and global platforms such as TED and Medium. They know of the latest trends in coffee. They listen to music that is globally trending—which can include music as diverse as K-pop or an obscure band from Africa. They watch well-developed productions on YouTube and have subscriptions to Netflix and Amazon Prime Video. They know where to download the books they need or want. They want to compete with their peers throughout the world. Therefore, when one looked at the pictures of demonstrators squatting on the road, it was no different than the youth in Amsterdam, London or Los Angeles.

This is the new force in Nepal to reckon with. In this country, we forget that 50 percent of the voters are women. We forget that the youth under 25 comprises of half of our population and people under 35 make up for 70 percent. However, out of the 6 percent of the people above 65, we have seen the 2 percent males rule in all sectors. Many of the protestors that I talked to shared how their parents or elderly family members did not understand what the dissent is about. Perhaps this is not a movement against the government, but a movement against the status quo.

There were political leaders and others who were quick to label this as an elitist movement, of the privileged English-speaking people (as most banners and posts in the group were in English). Comments on what they were wearing and what they were carrying became pointers to say they were outliers. However, when a single cause spreads to all cities across the country, it should be perceived as an alarm bell that must be heeded. In 2015, Blair Glencorse and I wrote an opinion article for The New York Times, ‘Shaking Up The Status Quo In Nepal’ which touched on this. The youths here can be a productive force to shake up the state of things. They can bring about big transformations, as the Arab Spring did in the Middle-East and North Africa. The next round of elections being just two years away, it will be important for not only the government but all political parties to think about how they will address the demands of these youth.

My book Unleashing Nepal was about a corporate executive wanting to use money, investment and management skills to transform Nepal. This became the base of my arguments for change in Arthat Arthatantra, my first book in the Nepali language. In Unleashing the Vajra, I end with the need for social transformation to realise economic transformation. Many of my columns in the past year have focused on individual transformation. This week, my second Nepali book, Arthat Pariwartan, is being launched. It explores the way we need to change how we look at Nepal and Nepalis. I talk extensively about the potential of the global Nepalis who are there to take on the world. All that is needed from society is a change in perception. These young people who took up to social media and the streets inspired the team behind Arthat Pariwartan to push the launch forward—in an e-book format that the youth can relate to, with audio embedded so that readers can listen along. Moreover, readers have a choice to buy and read separate chapters or the entire book.

Change is inevitable, but it is always important to be on the right side of change. One has to learn and change to be able to have the credibility to talk about change.