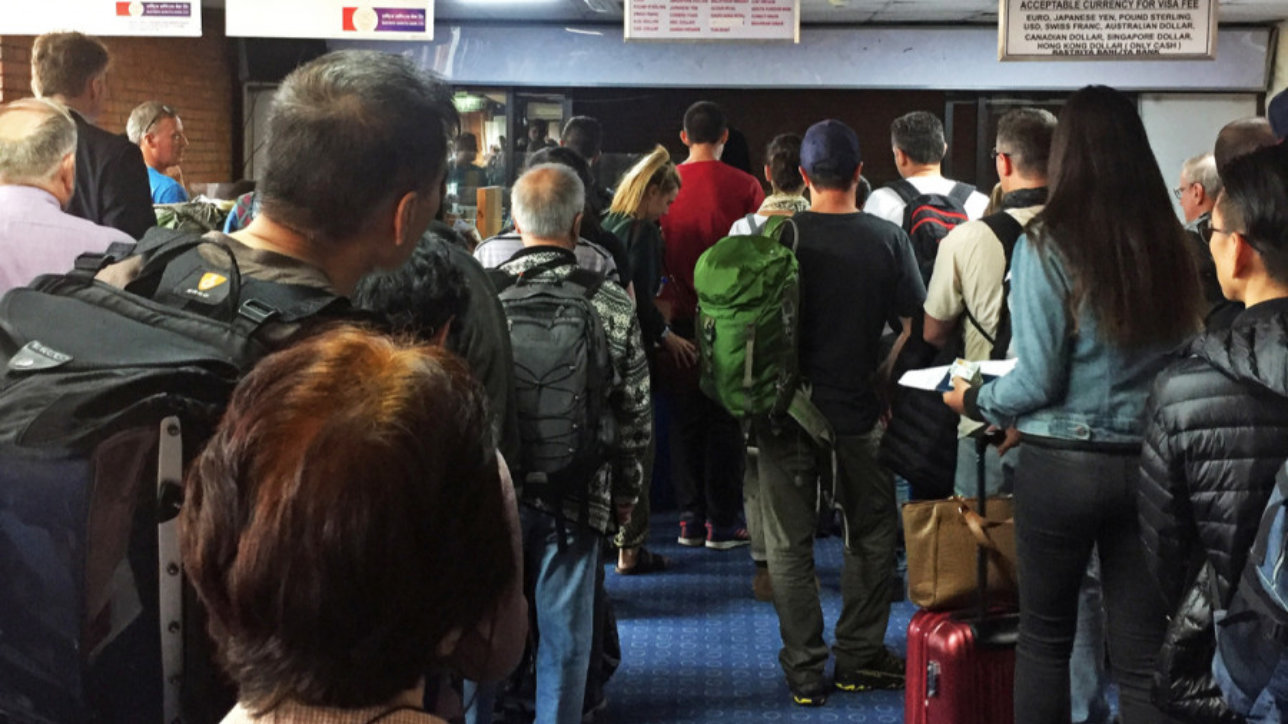 It was a nightmare day for airport authorities and passengers the day Xi Jinping left Nepal.

On Sunday, October 13, when Chinese President Xi Jinping left Kathmandu, the country’s only international airport turned chaotic. Tribhuvan International Airport had aeroplanes and people stuck in air traffic and on the ground. Quite naturally, the people were left frustrated. Having arrived that day from New Delhi, I knew I would be facing a long ordeal before I got home. I tried to keep myself busy and occupied throughout, and tried not to think about the circumstance. But when I reached the immigration counter at the airport, 10 hours from the time I left my hotel in Delhi, I snapped. There was a riot at the counters. The frustrated immigration officer at the Nepali citizen counter was clueless and hence, more interested in shirking his responsibilities. I got hold of the officer in charge and, as every immigration officer that evening told me, he was equally lost as to how to manage the affairs.

It was very clear that 11 flights would land in one and a half hours, which meant that around 2,500 passengers would hit the immigration counters at the same time. The immigration officer kept fighting with the passengers. Instead of attempting to alleviate the situation, he was openly pondering as to why people chose to travel on that day. I tried to calm him and remind him that the situation could be worse if the crowd lost its cool. I then decided to volunteer to control the crowd. For the next hour, I was at the immigration counter ensuring that queues were respected, and the old, sick and people with children received preference. The immigration officer was thankful and grateful, and so were many tourists. But what was alarming was that two tourists decided to offer me tips—one Rs1,000 and the other $10. Apparently, they were under the impression that, in Nepal, you need to pay to get things expedited. The situation in the baggage claim wasn’t much better. People’s luggage had been scattered all over the room, with no one there to answer queries. I was too exhausted to volunteer anymore—I spent the next twenty minutes to find my bag across the piles of bags. It had been over twelve hours since I started on the journey to take this one hour-plus long flight.

Many questions kept nagging me that night and kept me awake. First, and most important of all, why does anyone still choose to live in Nepal when there are so many alternatives across the world? It is very difficult to continuously convince oneself as to what are comparative advantages in terms of quality of life, personal or professional. Is it that Nepalis don’t care for civic sense? Why is it that while Nepal’s GDP has grown three-fold in the past 15 years and people have better education, their civic sense has plummeted? Why is it that people who follow rules of queuing in every other airport around the world at immigration and security counters just go berserk when they come to Nepal? Why is it that people get so selfish that they would do anything to jump the queue, from threatening staff to bribing them?

I was surprised to see that, in one instance, when I allowed a passenger in a wheelchair to skip the queue at immigration with a family member, the family produced 12 passports, and were not ashamed to do so. I was also surprised that the authorities could not plan ahead for such a day, knowing full well in advance how it would end up. What would have happened if a disaster, like an earthquake or fire, struck on such a chaotic day? It also seemed like many among the queue were non-resident Nepalis, who have no problems in abiding by their adopted countries’ rules, but who in this scenario were acting pathetically and adding to the chaos.

What needs to be done

An airport is often the point where people create their first impression of a country or region. In Kigali, Rwanda, the Rwandese are very proud of how nice and well managed their airport is. On Saturday, October 19, when I landed at Guwahati airport in Assam, India, I was surprised to see a clean orderly airport that resembled Southeast Asian airports rather than Southasian ones. A good airport is not only about decent infrastructure and hardware, but it is also about the systems, processes and people. Simply employing a proper queue management system can solve half the problems; cleaner toilets can say a lot about a country’s hygiene and sanitation. Shops and restaurants with substandard quality of products and services do not make people happy. More importantly, the authorities need to ensure that the changes are implemented consistently.

Instead of next year being a Visit Nepal Year, perhaps it would be better for the focus to change to make it an airport management year, where consistency in service provision is promoted over the year. There may not be any money made on lucrative contracts for publicity and advertisements. Neither will there be junkets to see how other airports in the world would keep their toilets clean. But there would be a sense of national pride and purpose. And perhaps the tourists coming in would automatically be inclined to promote Nepal to others.