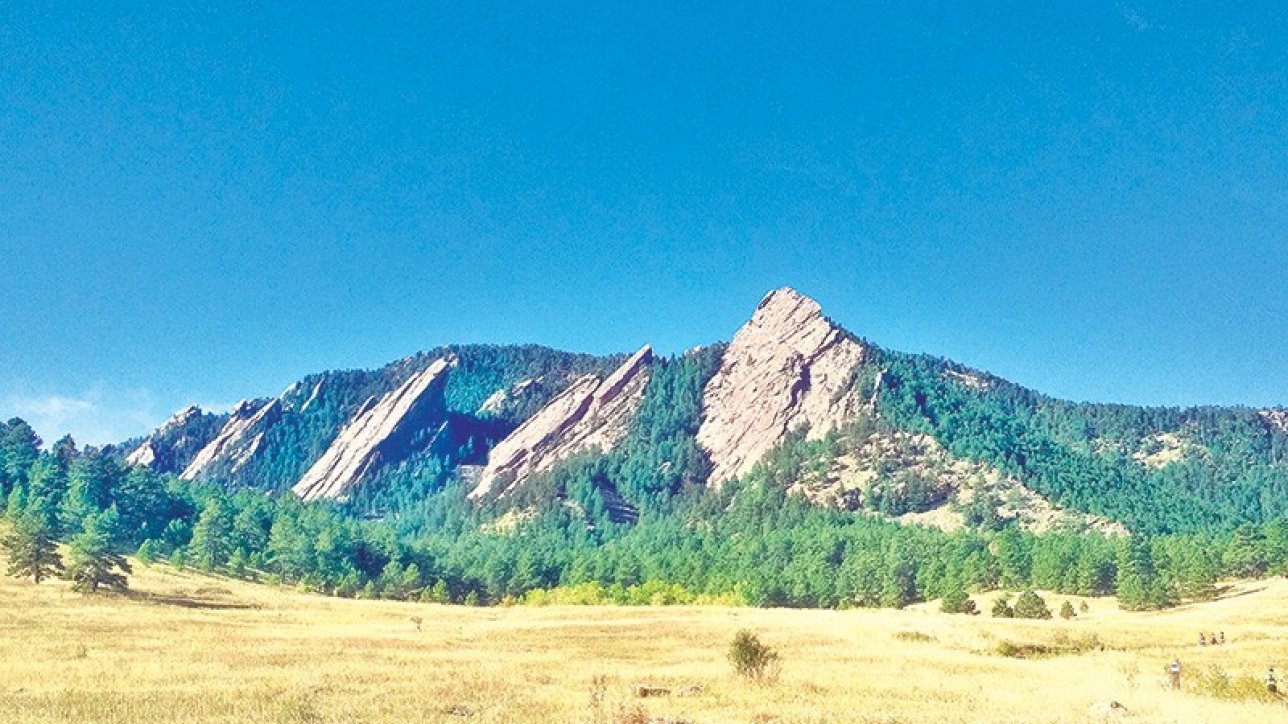 The flat iron hills that make the city of Boulder so beautiful remind you of being in familiar territory. While hiking the beautiful trails that crisscross these hills, one continues to think of getting back to somewhere you have been. Walking through the pine forests, it just reminds one of being on the way from Hattiban to Champadevi, or looking down you feel you are walking from Chisapani to Chandragiri. The only difference is that you do not have litter of noodle packets and water bottles. Also, there are no signs of bulldozers having made their mark. Walks through these hills make one wonder the commonalities and the contrasts. Smiling walkers and joggers greet you the same way you are greeted on the trekking trails of Nepal. All this reminds me of the piece I wrote for the Himalayan Arc–Himalayan Citizen, where I talk about home being where the hills and I meet.

The Jaipur Literary Festival (JLF) has branched out working on many festivals around the world now. This is the fourth edition of the JLF in Boulder, Colorado. The venue is the public library and one keeps wondering why in Nepal the concept of public library and space has vanished. At the opening ceremony, David Farnan of the Boulder Public Library said something that hit me very hard. Public libraries are the signs of existence of a real democratic society. These libraries exist because they are created and curated by an open-minded community. Sanjoy K Roy and his team at Teamworks churn out world class events at simple venues.

I just reflected on the challenges of doing events in the Kathmandu Valley as hotel hall prices are soaring and banquet halls with filthy toilets can only be used to cater to the thousands who are willing to pay for anything to keep up with societal competition. The four simple venues carved out of the spaces of the libraries makes this festival unique. Hundreds of volunteers and people making financial contributions make this festival happen. When I reflect on the similar festival Mountain Echoes in Thimpu, Bhutan and here in Boulder, it is also so important to have a society that has order to make hosting events easier. It does not come with the mayhem of an undisciplined chattering crowd that does not care about the rules or basic human etiquette. A lot for many festivals that are mushrooming in the region to learn from.

The Himalaya has a special meaning for Boulder and Colorado. It is always amazing to be part of a panel with people one has read and admired. Broughton Coborn, author of Aama in America: A Pilgrimage of the Heart, has now more books behind him. This was one of the first books I got engrossed in when I returned to Nepal after my studies. This book is about the journey of a Nepali aama to the US. When you hear Wade Davis, another explorer who has written about Nepal, one wonders how much one can travel during a lifetime and write and talk about cultures that one will never be able to encounter.

Yak Girl, as she likes to call herself, Dorje Dolma left Nepal at age 10 and settled in Colorado. Here is a story one can continuously push one into the past and discuss how she can compare present-day Nepal which has changed tremendously from the time she left many decades ago. Shambala Publications is a Boulder-based publishing house that has an amazing array of titles on the Himalaya and Buddhism, and many Nepal books have been published by them.

The early Tibetans and members of the Himalayan community settled here as they found the landscape similar to Tibet. Like the Uber driver who drove me from the airport said, this is the only place in US where you can find monks squatting on the front lawns. Due to the similarity of the higher Himalaya, the Himalayan citizens took a liking to it and now have developed a big community. It is difficult to talk about national identities here. Now Pema, a US citizen, does not want to confuse himself by talking about how their parents moved from Tibet after its annexation by China to India as refugees, and then moved to Nepal and found their way to the US. So they find the Nepali question of where is your home very awkward. Nepalis from Nepal and in Nepal need to realise that the identity of being a Nepali also emerges from the language one speaks.

Many Buddhist centres have sprung up, and many people who have put faith in the life and work of Buddha have settled here. When I did the workshop Buddha As A Coach, it was intriguing to see a hall full of people keen to have a conversation on how to use the tools given by Buddha in their everyday lives. Unlike in Nepal, where the discourse around Buddha is about Buddha being born in Nepal and nothing to do with his teachings, here a big community has been built on taking the practice of Buddhist teachings into contemporary lives.

Mayor Suzanne Jones leads a nine-member City Council that has six women members including her. They consider themselves to be a service providing firm and are keen to make the city free of waste by 2025. The city keeps acquiring open spaces. The administration works closely with the City Council to ensure that there are many events around the year like the JLF that give a unique brand identity to the city. Currently, 60 percent of the city comprises of open spaces that neighbouring cities envy.

Perhaps one thing that Kathmandu can learn from this sister city is how to keep open spaces open, and not be tempted to lease out every inch of open space. With more resources from taxes and federal grants, the municipality must be able to acquire private spaces to increase open spaces. The low-hanging fruit will be building a Boulder Park with the help of the City of Boulder at the Teenkune open space close to the airport which everyone fears will be leased out to some party sympathiser, like many open spaces in the Kathmandu Valley.