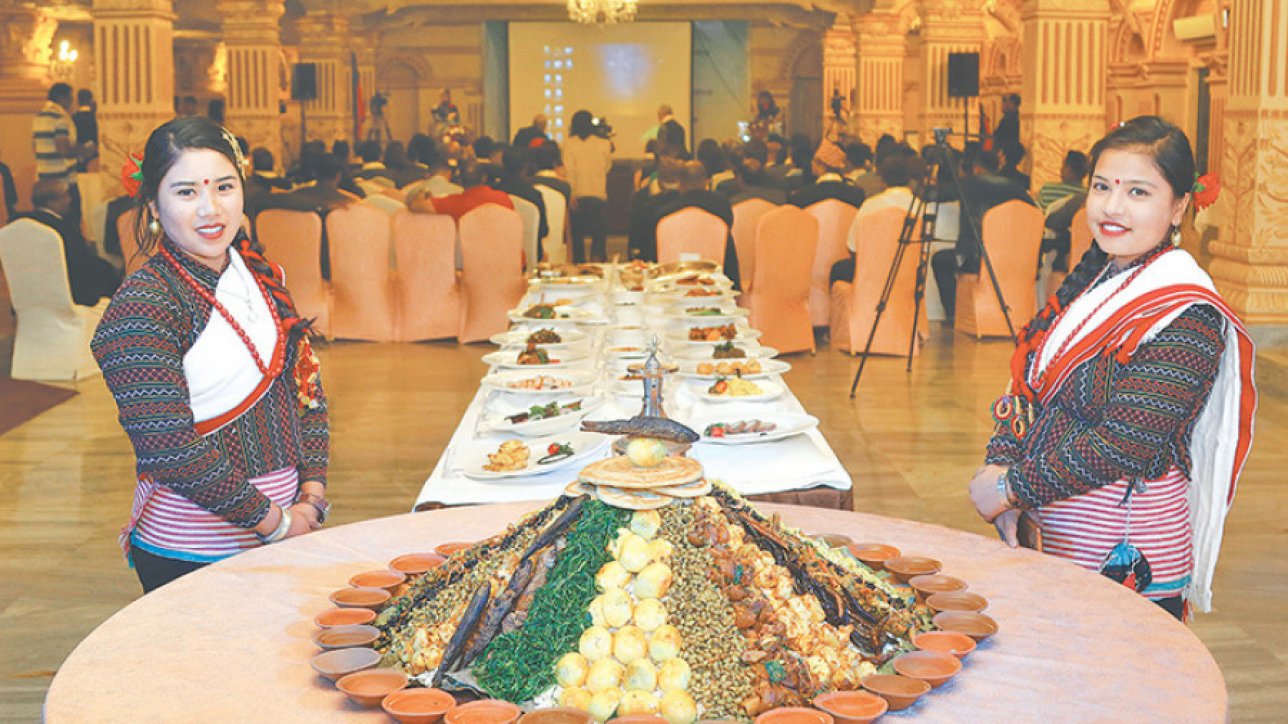 In Kigali, we were at a friend’s place to make dumplings and celebrate Chinese New Year. I had made some Kathmandu Valley momo achaar (a tomato base thick sauce with coriander, sesame seed powder and lapsi hog plum powder, and used readily available pumpkin seed powder instead of soybean powder and, of course, chillies) and an eastern Himalayan style spicy sauce with dalle chillies and timmur thrown in.

People from more than 10 nationalities were there, but everyone had either tasted Nepali food or had been to Nepal. People started suggesting that given the large expatriate community, there should be a Nepali restaurant in Kigali similar to the one like Kat-Man-Doo Restaurant in Lilongwe, Malawi. One spoke about the yummiest momos they had in Seychelles, where many Nepali students go for jobs on student visas.

Another one talked about discovering a Nepali restaurant in Warsaw, and I did share my surprise at finding a nice Nepali restaurant in Oslo. A Rwandese shared with me how Nepali restaurants became their go-to places during a conference in Lisbon. Rwandese students who have studied in India also share how they hung out with Nepali students during their student days, and loved food cooked by them as it had fewer spices and good taste.

Perhaps in our quest to drown ourselves in the news of the myopia of Nepali politics, the fighting of older men at home, families, businesses, NGOs, social service organisations and, of course, politics has let us forget how the travels of Nepalis to more than 180 countries now have created a fantastic diaspora who like to showcase their food. The more we explore Nepali food, the more interesting it becomes, and if you are a good storyteller, articulating around how gundruk is made or how timmur is so different from the family of other Szechuan pepper, it can create conversations that can be the centerpiece of any gathering. The diversity ranging from Kathmandu Valley Newar food to the food of the Eastern and Western Himalaya to the variety in the Tarai can baffle anyone in terms of how a country considered so small between India and China has mind-boggling options.

Many cookbooks are available in the market; Dolly Rana’s The Rana Cookbook is a visual treat and provides a peek into the Rana households. For Nepalis outside Nepal, Jyoti Pathak’s Taste of Nepalcontinues to be the go-to cookbook. I am waiting to get my hands on Santosh Shah’s Ayla and Prashanta Khanal’s Timmur. Both perhaps will help Nepali food to be put onto the global map. In Unleashing Nepal, I talked about how former Thailand prime minister Thaksin Shinawatra in the early 2000s urged leveraging the soft power of Thai food. He spoke about how every city in the world should have a Thai restaurant and every home in the world should be cooking Thai dishes. No wonder people in different parts of the world grow lemongrass, galangal and kaffir lime in their kitchen gardens.

Talking about food is an art. When I go to the presentations, my team members tell me I am talking about food! I realize that many Nepalis who can cook very well cannot describe it to a Nepali or global audience. The art of conversations around food is essential. If we watch major food shows, it is equally about storytelling and descriptions and food. Good discussions can have a large audience. In two weeks, no one could believe that a 3-hour-23-minute conversation between Shrinkhala Khatiwada and Sisan Baniya would garner 1.1 million views. So, if there is good content, people do listen. We have seen many food bloggers emerging and people who are taking Nepali conversations about food global.

In my column Globalisation of Food, slightly more than a year back, I had talked about the identity of Nepali food as to how it is more than the identity of the people from Nepal, representing the more prominent Nepali speaking people around the world. Nepali food has to get out of the Nepali citizenship restrictions where Nepali nationalists are unwilling to treat an aloo dum from Sikkim or a marinated meat dish chhoyla done slightly differently by a Burmeli Nepali as Nepali food.

There is definitely a massive market for Nepali restaurants and Nepali food products as the internet brings the world closer. People know that their experience with food in Nepal, unlike 25 years ago, can be repeated in some other part of the world. Many expatriates in Kigali urge us to figure out how making a Nepali restaurant here a reality. Perhaps, the opportunity exists for a global Nepali food chain or a coalition on a franchise basis that can dot every city of the 180 countries Nepalis live in. Will love to do a book in 2030 talking about the experience of visiting these!