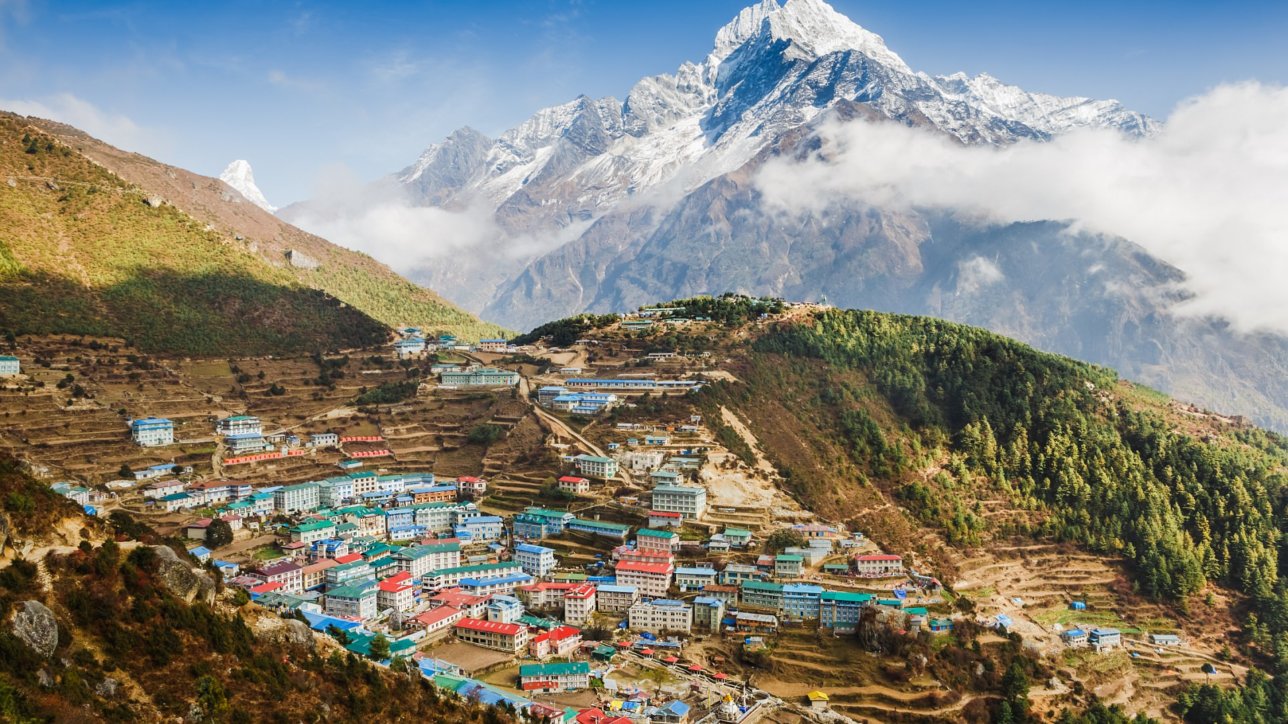 Nepal’s relationship with its northern neighbour, Tibet, was cemented when the Nepali princess Bhrikuti Devi married the king of Tibet, Songtsan Gampo, in the seventh century AD and earned the divine title White Tara. Thereafter, hundreds of Nepali artisans visited Tibet to build monasteries; and trade in bronze, gold and silver idols of Tara and other deities became one of the cornerstones of commerce between the two countries. For Nepal, Tibet was a more immediate entity than China, for thinking of distant Shanghai as a city with which to do business was farfetched.

During the mid-16th century, a treaty was signed between Nepal and Tibet that made Kathmandu the sole entrepot for the latter. In a fairly short timeframe, this allowed the ethnic Newar merchants of the Kathmandu Valley to build a roaring business with Tibet, trading with goods to and from India. However, defeat to a Chinese expedition force in 1792 changed Nepal’s fortunes till trade was restored in 1856, when Nepal invaded Tibet and forced the trade routes to re-open. The Newar merchants again began to set up businesses in Lhasa, where they could trade goods from India and other parts of the world for gold and silver.

Newly communist China invaded Tibet in 1950, the same year that Nepal’s first flirtation with democracy began after the end of the autocratic Rana regime and the reinstatement of the Shah kings. The relationship with Tibet quickly came under review, particularly in the context of an India that was at the time attempting to play a dominant role in Nepal, while King Mahendra attempted to play Nepal’s ‘equidistance’ card between India and China. Kathmandu subsequently agreed to Tibet being a part of China by substituting an ambassador in Lhasa with a consul-general. Nepal signed a comprehensive friendship treaty with China in 1960, and the following year construction began on a highway connecting Kathmandu with Lhasa, though this did not see commercial use for long. The 1962 India-China war changed the equation again, however, as India became increasingly concerned about Nepal’s position vis-à-vis China, leading to New Delhi’s agreement to a more flexible trade-and-transit treaty with Nepal. In turn, by 1964, Beijing agreed to unfreeze the bank accounts of Nepali traders in Lhasa, leading again to a resumption of trade relations between Lhasa and Kathmandu.

Yet over time, India’s role in Nepal’s geopolitical scheme remained dominant, despite Kathmandu’s attempts to prop up the Beijing relationship as a counterbalance. While China supported King Birendra’s Zone of Peace proposal for Nepal during the 1970s and 1980s, India saw it as an attempt by Nepal to wriggle out of its sphere of influence. India rejected the concept and Nepal itself dumped the proposal after democracy’s second coming, in 1990. India’s geopolitical supremacy vis-à-vis Nepal was thus confirmed, yet again. In 1989, the import of arms by Nepal from China without the knowledge of the Indians led to the imposition of a trade embargo by New Delhi. While this action sparked international condemnation of India, it did weaken King Birendra’s authoritarian power, giving way to a constitutional monarchy. In the democratic era after 1990, India continued in its privileged place in Kathmandu’s radarscope. The rush of Indian multinationals investing in Nepal further consolidated its position. It was only in 1994, after the Communist Party of Nepal (Unified Marxist-Leninist) won general elections that the relationship with China was revisited. The recent electoral success by the former Maoist rebels is a further extension of this, as the comrades just out of the jungle have sought rather desperately to woo Beijing.

As noted previously, however, Nepal’s relationship was long mostly with Tibet, not with China. Goods and services that were imported from or exported to mainland China always had to go through Calcutta, by sea to either Shanghai or Guangzhou. But Nepal was seen as a haven for Chinese goods by Indian customers, at least until India liberalised and reduced import duties during the early 1990s. Chinese goods would arrive in Kathmandu from Shanghai via Calcutta, and then be smuggled into India. This is the only explanation as to why, for instance, Nepal imported more than 25 million Chinese umbrellas every year during the late 1980s, at a time when the country’s total population was less than 22 million.

These Chinese goods found their way to India via many of the border towns of Nepal. But an especially large centre emerged in Dhulabari, in eastern Nepal, just seven kilometres from the Indian border. These items were bought largely by Tibetan businesspeople, to be sold in Darjeeling and Kalimpong, as well as in a full-fledged grey market in Siliguri, from an area popularly known as the Hongkong Market. One always used to wonder about the fact that, apart from raising their collective voice every year on 10 March (the annual Uprising Day, commemorating the attempt to evict the newly arrived Chinese soldiers from the plateau), these Tibetan traders seemed happy enough to make a good living trading Chinese goods.

During the modern era, Tibet and the Tibetan people have been the only issues about which both the Nepali and Chinese state seem jointly concerned. Whenever the Kathmandu government felt the need to appease its Chinese counterpart, it would simply ensure that it curtailed the activities of ‘Free Tibet activists’ from among the roughly 25,000 Tibetans living in Nepal. This would take the form of, for instance, the royal regime shutting down the Dalai Lama’s representatives’ office or, most recently, the Maoist-led government trying its best to ensure that no Tibetan protestors showed up in front of the Chinese embassy during the days surrounding Uprising Day in March.

For Nepal, the show of proximity and friendship to China came to be judged by the extent to which it went to curtail the movement of Tibetans within Nepal, and the nationalist way in which the ‘One China’ policy was supported, almost by rote. With the West taking the Tibet issue as something of a boutique cause associated with Nepal, there has never been a dearth of Tibetan sympathisers, from the diplomatic community to the legions of tourists visiting the country, many of them using Kathmandu as an entry point to Lhasa. To this day, US senators write sporadically to protest the Kathmandu government’s actions in interdicting and accosting Tibetans. To Kathmandu’s dismay, continuous streams of ‘pilgrim-refugees’ continue to flee across the high passes into Nepal, en route to Dharamsala in India.

Anchoring the axis
Nepal’s unifying figure, Prithvi Narayan Shah, famously referred to the new state of Nepal as “a yam between two boulders”. He was mostly pointing to the danger of being crushed between two empires; but in the modern day, with evolving transport and easier access, there are vast opportunities as well. With the emergence of China and India as potential leaders of the next global economic order, and as international economic visioning slowly shifts to the Bombay-Shanghai axis, Nepal is suddenly in an ideal position to take advantage of the emerging reality.

The situation has certainly changed quickly. While Kathmandu still believes that it should play the China card every time it engages in deal-making with India, the reality is that Beijing and New Delhi have closer ties than ever before – working together on myriad economic issues, and leaving only a few border issues to be sorted out later. With Indian companies now manufacturing goods in China for the Indian market, and Chinese companies beginning to set up companies in India for the global market, Nepal stands the chance of soon losing its relevance. Gone are the days of smuggling through the Nepali Tarai, with Chinese goods now being directly redistributed in Indian markets after they arrives in port at Calcutta. While Tibetan traders still peddle Chinese goods in Kalimpong and Darjeeling, these have been imported by Indian traders in Siliguri.

At the same time, new opportunities could well arise as China and India squeeze closer together. Nepal is now faced with the possibility of engaging in some longer-term, not to mention strategic, thinking in terms of gaining from the increased business activity between India and China, and legitimately benefiting from the same. The rail link from Beijing to Lhasa via Golmud is currently slated to be extended to near Khasa, the border town 120 km northeast of Kathmandu. In turn, this could lead to an extension of that rail-and-road link to the Indian border town of Raxaul, only another 200 km. Nepal’s strategic location as a transit link could subsequently be augmented by industries that would take advantage of the location. There would be income from links and through-transit. Indeed, a compelling business opportunity exists merely in transferring containers from trucks coming from China – which are left-hand-drive – to those coming from India, which are right-hand. To be sure, there are also many north-south road tracks being pushed through right now between the northern rimlands of Nepal and the midhills. These are bound to grow as commerce grows, taking advantage of the China trade as well as the natural bounty of the Tibetan plateau as it comes up for exploitation.

As Nepal goes forward, tourism also holds a potent opportunity for leverage. With more than four million tourists (though the number dropped dramatically after the protests on the plateau last March) now visiting Tibet annually (many of them from Mainland China), Kathmandu’s Tourism Ministry has to find ways to get a fraction of them to come south of the border. In this, building a good transit road (and allowing for a slightly more relaxed visa regime by the Chinese authorities) could well facilitate young Chinese and Tibetans to drive to enjoy Nepal’s unique tourism and entertainment offerings, including new ones yet to be established. If a million Chinese citizens go to Macau for gaming and entertainment every single day, then a small fraction could certainly be lured into world-class centres in Nepal, too.

Similarly, two of the holiest places for Hindus and Buddhists anywhere in the world are found in Tibet, with both Mansarovar Lake and Mount Kailash being must-visit pilgrimages for many. Nepal has already being a transit point for Indian tourists visiting this lake, though the country has yet to figure out how to take a slice of revenue from this tour. The Indians come via Indian airlines and transit from Khasa in Chinese vehicles, thus leaving Nepalis with only a bit of the money spent on a few nights’ worth of hotels, as well as the commission that Chinese tour companies provide. This is only a small example of Nepal being unable to charge a proper price for the vast offerings it has.

In the future, Nepal needs to focus intently on the two T’s – transit and tourism. In doing so, it will vastly increase its ability to bridge between the nearly two and a half billion people of India and China. This would certainly be preferable to the rote rendition of traditional political equidistance voiced by every Nepali prime minister on a visit to Beijing. Nepal needs to view its two massive neighbours not from the perspective of their geopolitics, but rather through the lens of economics. The starting point could be the forming of a China-India Economic Council in Nepal, which could not only look at Nepal’s economic position linking these two countries, but could also be a serious institution that could do much to anchor the Bombay-Shanghai axis. Critical economic strategy and research alike could flow from such an institution, which could hold out the possibility of not only redefining the next global economic order, but also of finding and rooting Nepal’s place in that new paradigm.